I’ve been posting for a while on my instagram about our adventure into night weaning, but I thought I would write an overview here for anyone who is thinking about starting it as well. I already know this is going to be a long one!

So a little background on my son’s sleep: Asahi was a pretty good sleeper until he turned about four months old and the dreaded four month sleep regression hit. For us, this turned into pretty much one sleep regression after another and he never slept more than 4 or 5 hours at a time since that point. There were weeks where he was waking up every hour and nights where he was up for two hours in the middle of the night. To be honest, I can understand! He started sitting up at 6 months, crawling at 8, and took his first steps at 10 months old. He was developing so quickly and when you throw teething into the mix, he was really struggling with sleep. We did attempt sleep training using the Ferber method when he was 5 months old but ended it after 5 horrible nights with no improvement and him crying for two hours each night. After that we decided to not sleep train (if you want to know more about that whole thing, watch my video here)

After that point, we decided for me to continue nursing Asahi to sleep for every nap and nighttime. We went through phases with bedsharing and eventually moving Asahi into his own room when he was about 9 months old. When he was a year old I was getting up and nursing him on average 4-7 times in a night.

Basically, he wasn’t a good sleeper AT ALL.

As you can imagine, I was very tired. I posted on my instagram about experiencing nursing aversion at night and my interest in night weaning. Several moms recommended the Jay Gordon method of gentle night weaning so I decided to try it out. By the way, this method is only recommended for children over one year old since the attachment should be secure between mother and child at this point. If you haven’t yet, read his full method here, but the two main points are:

By the way, this method caters to bed sharing and room sharing families although I was able to be successful with my son in a separate room from my husband and I. No matter what your sleeping situation, I think this method could work for you.

And so it began…

I’ll be honest, I was nervous that first night. My plan was to nurse him when he woke but try to rock him before he fell asleep within my desired sleep window (11PM-6AM). Here’s how it went: 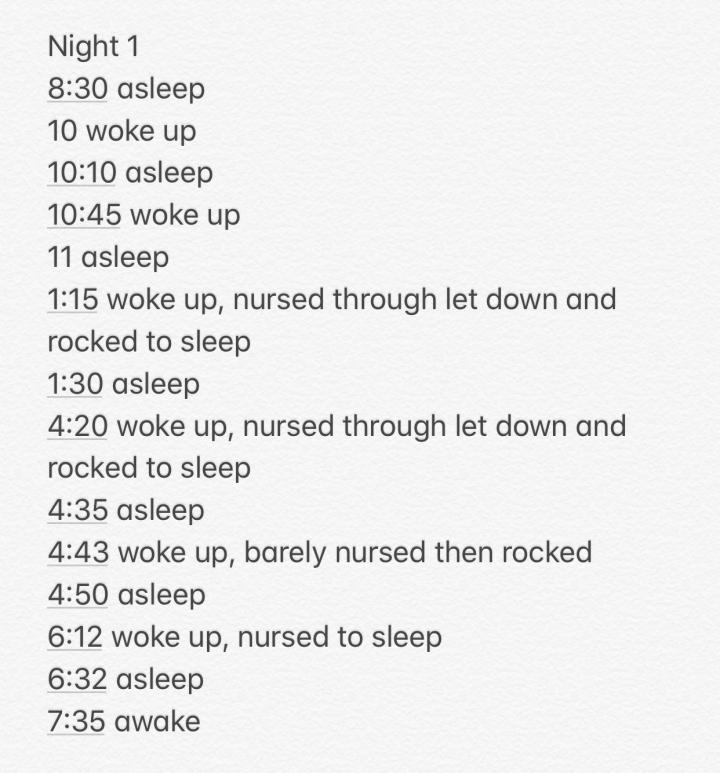 He woke up four times in the night and his longest stretch of sleep was a whopping 2 hours and 50 minutes. This was a good baseline though because this is pretty much how he had been sleeping the last few months.

Now, over the next few nights I continued nursing his when he woke up. The Jay Gordon method says you should do this for about 3 nights, but I ended up nursing at wakeups for a bit longer because it was the New Years holidays and we were staying at my mother in laws house. I wanted to stabilize Asahi’s routine before making the more dramatic change of not nursing when he woke up. I would definitely recommend only doing this method when you are at home in your normal routine since that will be most comfortable for you and baby.

The holidays were over and we were back in a routine so it was on night 13 that I decided we were going to not nurse between 10PM and 5AM. I changed my time window because Asahi was transitioning to one nap a day at this time and therefore going to bed much earlier. Here’s what happened that night: 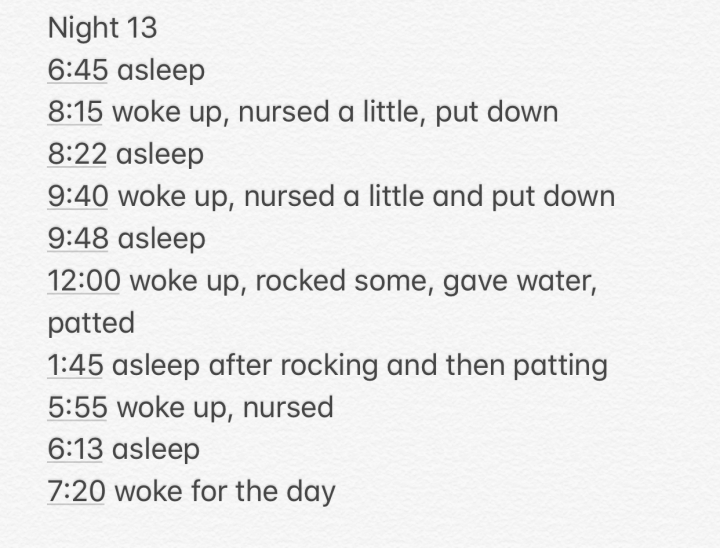 That first night of not nursing was pretty brutal. As you can see it took me an hour and 45 minutes to get him back to sleep with rocking and patting. Eventually he was asleep and slept until 5:55AM! So even with that small change, he slept for just over 4 hours! This is already an improvement over the very first night. He still woke up 4 times though.

Over the next few nights, I continued to rock him and offer water when he woke up during the time window. He was still waking up about four times a night but on a couple occasions he would wake up and sleep for 10 minutes or so after I settled him and be up again (usually 3-4 times like this). Here’s an example from night 14: 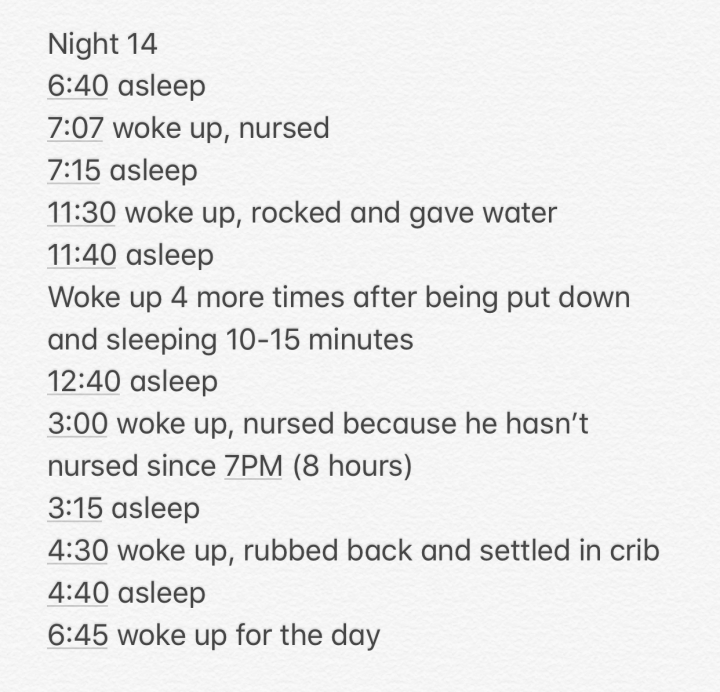 That was a fun night…

However, I kept at it and didn’t give up. The one good thing was that as the days went on he was taking less and less time to settle and finally stopped waking up after I settled him. The turning point was on night 18, which I consider our first big success!

I think he had only had one other night like this in his life. He only woke up twice in 11.5 hours of sleep. I was very happy that morning! After this night, he continued waking up only once or twice a night. I continued soothing him when he woke but I tried to get him to fall asleep more and more on his own but with me supporting him.

By night 30 he was sleeping through the night!

I actually remember waking up around 3AM this night and seeing Asahi sitting up in his bed on the monitor. He wasn’t crying so I waited to see what he would do and after a minute or so he laid down and went back to sleep! That’s when I knew that he had really started to learn to relax and fall asleep.

Since then, he has woken up around midnight one or two nights, but generally he is sleeping from the time I put him to sleep (7PM) until 4 or 5AM. I do nurse him at that wakeup and he does sleep for another 1-2 hours and wakes up between 6:30 and 7AM.

Additionally, the last two nights as I am writing this, he has fallen asleep in his bed by himself at the start of the night! This is pretty much unheard of for him until now! I still nurse him before bed but if he gets wiggly then I put him down and he has been able to relax enough to fall asleep, something he couldn’t do before. I am one proud mama!

Possible Contributions to our Success

Some Things To Expect

Where are we going from here?

Overall, Asahi’s sleep is greatly improved from before we started the process, but we are still occasionally having wakeups (especially around 3-4AM) and it’s hard to get him back to sleep. I think going forward I am going to be more strict with not nursing in the desired sleep window because sometimes I give in and nurse early when he hasn’t nursed since bedtime (8+ hours). However, I do think it’s important to be flexible and just go with your gut instinct as to what your baby needs on any given night. I’m always worried that he is teething or possibly unwell, so if he is crying or waking frequently at this point I often assume it is for a reason and try to soothe him however I can. It can be easy to get caught up in following the method exactly and miss out on reading your baby’s cues.

I hope this post was helpful to anyone who is thinking of attempting night weaning. Again, I encourage everyone to take a gradual approach with this and listen to your intuition. I hope this gave you a realistic look at night weaning and you will have some success as well!

4 thoughts on “Night Weaning My Son in 30 Days”