Asahi is now 18 months old! My last update was when he was 15 months and although some things are similar, he has also changed quite a bit, mostly in the realms of eating, sleeping, and speaking.

I’ll start with his daily schedule:

6-7AM – Awake for the day. Cuddles with mama and playtime while I make breakfast. Sometimes has a little bit of cows milk or fruit to tide him over until breakfast.

9:30AM – Head out the door to a local park, play date, or coffee shop. Usually has a snack if we are out too.

12PM – Lunch, either at home or I take it with us if we will be out

5PM – Snack and playtime at home while I make dinner

Sleep: So much has changed with sleep in the last month or so! After Asahi finished getting his molars in, his sleep greatly improved. These days, he is sleeping from about 7:30-8PM until 5AM without waking up. I changed his bedtime routine recently where I nurse him in the living room before bed with the lights turned down. After he’s done I take him into his room, turn on the white noise, put on his sleeping bag and sing to him while holding him. I keep singing when I put him down and once the song is done, I leave the room. It took a couple nights for him to get used to this routine but now he is basically asleep when I lay him down! It seems to work well for us. Asahi also naps once a day for 1.5-2 hours and I do the same routine for his nap.

Physical Developments: Unless he is holding my hand, Asahi basically has one speed, run! He loves being outdoors where he be free to choose his own direction. When we go to the park, he can climb the stairs and go down the slide by himself! It took awhile for him to get good at it (and for me to feel comfortable letting him!) but he got there. He still loves playing in the sandbox and has now added filling up his bucket with water and dumping it all over himself to his list of favorite park activities. Good thing the warm weather is already here in Tokyo! Another thing he does well now is holding my hand while we walk. We started practicing a few months ago and he didn’t like to do it. But I kept explaining to him that it was dangerous walking next to cars without holding my hand and if he let go then I would carry him. After a few weeks of this he got it! Now he holds my hand pretty well while we walk. It’s kind of fun to go on walks together in our neighborhood and hold his hand while he hops on and off the curb, smells the flowers, and looks for wan wans!

Since the weather warmed up we have been spending a lot more time on our balcony playing with toys, water, and bubbles! Asahi also likes to practice climbing up to sit on our patio chairs. He can also climb up on the bed and get down now by himself. 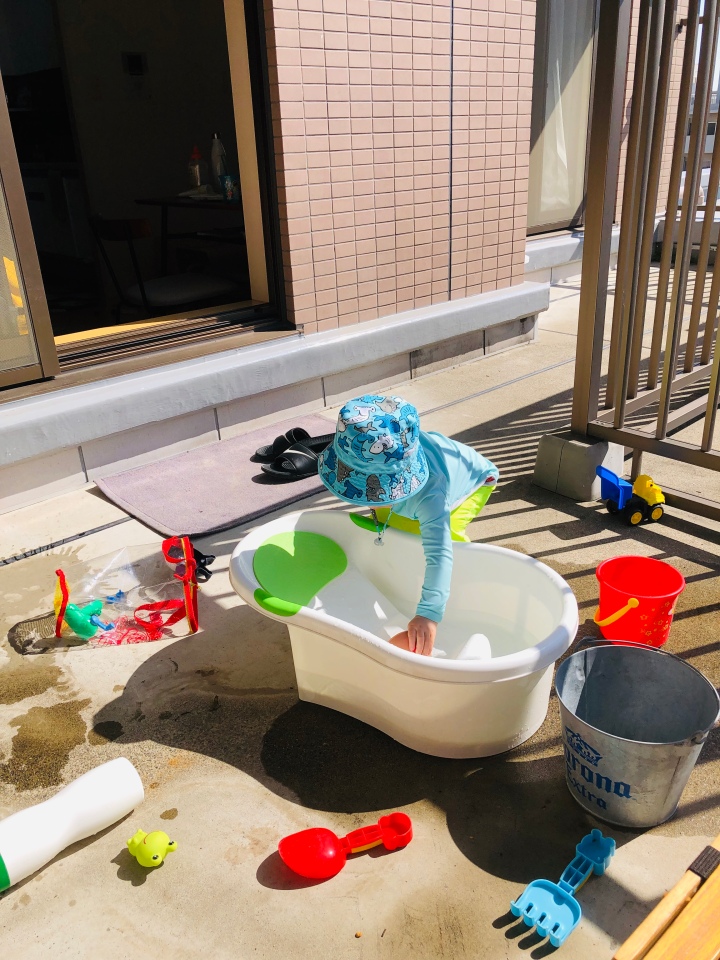 Language: Language seems to be a strong suit of Asahi’s and he is constantly adding new words to his repertoire. He is very good at copying sounds still but I’ve noticed it is easier for him in Japanese. He can understand everything I say in English but he doesn’t immediately copy words as often in English as he does in Japanese. I think Japanese is just a bit easier to pronounce and has a lot of repeated sounds. He also now calls out for me when he needs me to do something or if he can’t see me or find me, which is rare in our small apartment! Some of the new words he’s been using in the last month are:

We are not using sign language as much now because he can speak but he does still use the sign for “more” sometimes.

Eating: Asahi has been eating well the last few months except for when he got his molars in.  He eats three meals a day and two snacks. A lot of his favorite foods are the same as the 15 month update but with a few additions:  scrambled eggs with veggies, pasta (particularly rotini) with any sauce, blueberries, strawberries, grapes, cherries, pineapple, orange, cheese (all types), pancakes, tofu, breads, cheese bean and corn quesadillas, pizza, and miso soup. You can read about how we did baby led weaning here!

He is also breastfeeding three times a day, once around 5AM when he wakes up before sleeping a bit longer and before his nap and bedtime.

Likes: Asahi is super active and loves to do anything involving movement. He’s happiest when we are outside at the park or even just going on a walk. Recently, he’s much more into cars (he calls them beebeecar) and loves to point them out when we are walking around. He also plays with them a lot at home and enjoys putting them in and out of containers, down ramps, or just plain hiding them in random places! He also has gotten much more into coloring and stickers recently, so hopefully that helps entertain him on our upcoming international flights. We do occasionally let him watch some TV, mostly when I need a break! He likes the Japanese shows Shimajiro, and Inai Inai Baa (because there’s a wan wan) and of course Anpanman. He also likes Paw Patrol for English shows. He is still obsessed with balls and plays with them every chance he gets! Asahi also still loves his wan wan (dog) stuffed animal and sleeps with it for every nap and nighttime.

Dislikes: As with most toddlers, Asahi doesn’t like it when he doesn’t get his way! If I don’t let him do something right away when he wants it, such as play with his bubbles, then he has a bit of a meltdown. He doesn’t quite get the concept of first we do this, then we can do that, but I keep trying to explain it to him so he will understand it sooner than later! Luckily, he has stopped crying every time we leave a place, so it seems transitions are getting easier for him, at least for now! However, when we traveled to Hiroshima last month I could tell it was hard for him to be out of his routine. He wasn’t sleeping well and by the end of the trip would only nurse and not eat solid foods. I’m hoping that this upcoming trip to the US will go a bit smoother now that he is slightly older! It’s amazing what their brains are capable of in just a month!

18 months is a challenge since Asahi is so active, but I am actually really loving it. He grows so much every day and I’m so grateful to be present to witness it. Having him sleeping better is helping my mental and emotional state SO much as well, so I am grateful for that too. We are looking forward to what the next few months have in store for us!