As is the case for most women, entering my second trimester was a great relief from all the trials and tribulations of the first! Read on to find out a little more about my physical and emotional symptoms during weeks 14 – 26!

Physical: As I entered the second trimester, I was lucky enough to experience less and less morning sickness. I don’t think I had any nausea by about week 16! However, there was a downside…morning sickness was soon replaced by daily dizzy spells. This is a common symptom among expectant mothers, but I felt like it would never end! Whenever I would stand up from my desk at work or from kneeling down talking to a student, I would experience pretty severe dizziness and my vision would go black for about 10-15 seconds. I have had a history of fainting (usually because of low blood sugar) so it did worry me a bit. I was often afraid I would pass out in front of my students! Although that never happened, I did have one day in particular where I realized I needed to be a bit more careful. Here’s the story:

When I was around 14 weeks pregnant, I had come to Tokyo to visit my husband for the weekend. I normally took the last shinkansen back to Fukushima (where I was living at the time) on Sunday night, but this particular night I missed the last train. My only option was to take the first train on Monday morning. I had a class to teach during first period, so I needed to be at work by 8:30am, meaning I was taking the first train around 5:45am. I woke up early and rushed to the station to make sure I wasn’t late and didn’t have any time to get something to eat. I was waiting for the Yamanote line to arrive and take me to Tokyo Station where I could transfer to the shinkansen, and I already didn’t feel well. I was nauseous but I thought I could make it if there was a seat available on the train. As it pulled up, I realized just how naive I had been…there are no seats on a first train in Tokyo on a Monday morning. The train was packed with either salarymen and women heading to work, or young people obviously recovering from a raucous night out the night before. And everyone was too sleepy to think of offering their seat to a not so obviously pregnant woman! I stood and held on to the handle as the nausea began to well up, just hoping I could make it a few stops until a seat opened up. But within two minutes of being on that train, my vision began to blur and I nearly passed out! I had to get off at the next stop to avoid making a scene, and as I crouched down on the platform I realized just how vulnerable you can feel being pregnant. After a brief visit to the bathroom, I was able to barely make the next train and then finally, the shinkansen. I arrived at school five minutes before my class started with an emergency Starbucks in hand and all I could do was text my husband saying, “Don’t EVER let me take the first train again!”

That was the first and last time I had severe dizziness in my pregnancy, and luckily the symptoms subsided after a few weeks. I would say this is the last serious symptom I had in my pregnancy. The only other symptom I experienced was round ligament pain as my uterus expanded. It was in my second trimester that I began using oil to (hopefully) prevent stretch marks. I got mine off iHerb.com. If you’re interested, it’s called Natural Stretch Oil by Earth Mama Angel Baby. I’ll let you know how it worked out after I give birth!

In addition to a growing belly, around week 18 I started experienced some sciatic nerve pain on my right side. I tried all the recommended stretches and somehow I felt like it was only getting worse! There were times when I couldn’t walk because the pain was so sharp in my hip. My doctor recommended I start wearing a belly band early to see if it helped. I figured I would wait a little while since I was traveling to the US in a few weeks time. Somehow by 22 weeks I had zero pain! It must have been something to do with baby’s positioning. If sciatic nerve pain is something you’re experiencing, give it some time because it might go away like mine did!

Lastly, an acne update! I noticed my acne clearing up slightly around week 20, and by week 25 I only had a few small breakouts each day which is a huge change from the first trimester! I tried several new products during this time to see if they made a difference, but honestly I feel like most of it was up to hormones. I may do a separate post reviewing the products I tried, but there are too many to link here!

I would say weeks 18 – 27 were some of my most energetic in my pregnancy! I no longer needed to take naps when I got home from work, and I was able to reestablish a workout routine that I had lost momentarily in my first trimester. After my dizziness wore off, I felt comfortable traveling and being active in general. It truly is a great time in your pregnancy!

Emotional: Although I was still plagued by various physical symptoms in the beginning of the second trimester, emotionally I felt pretty good! My previous feelings of worry about losing my independent lifestyle had shifted towards excitement for a new chapter in life. I started reading a lot more about pregnancy and watching inspirational videos. One of my favorite books was Ina May’s Guide to Childbirth because the entire first section is dedicated to positive and inspiring birth stories. Reading these stories really helped me to dispel some of my fears about childbirth. I would highly recommend it for anyone who wants a vaginal birth!

Here’s a couple of bump shots from the second trimester! (Please excuse the poor quality!)

19 Weeks – A little bump is starting to show!

And 26 Weeks – Things are getting more serious! 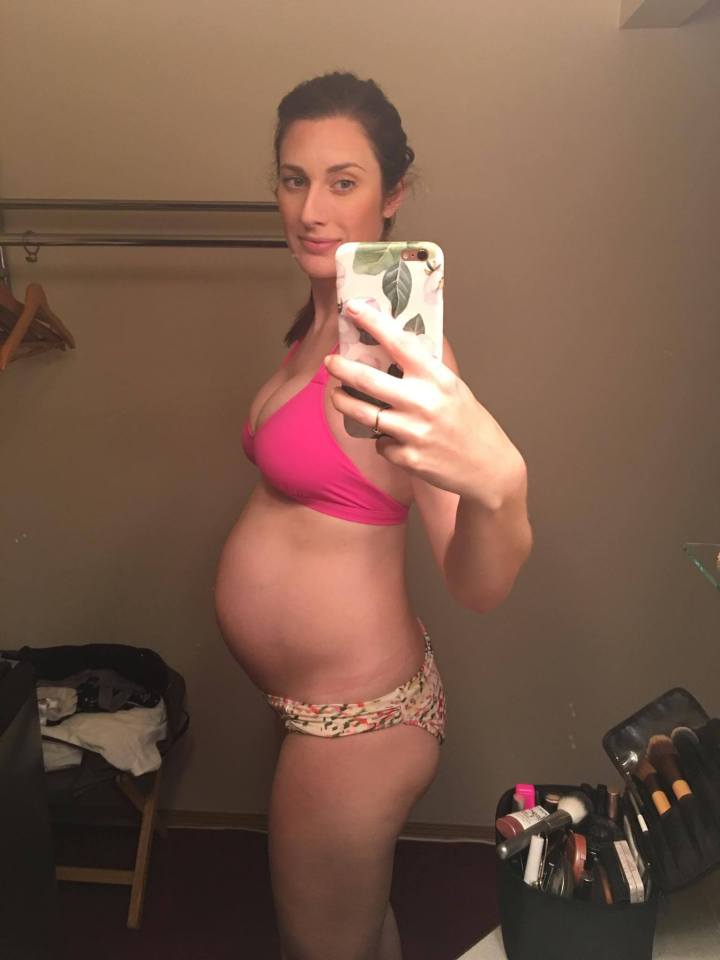